Last Saturday (November 12, 2016), the American Medical Association, AMA honored Dr. Omalu with its Distinguished Service Award.  The award is a well-deserved honor, and probably long overdue, for a man, who despite being denigrated, maintained his professionalism and spoke truth to power.  There’s a lesson here for all of us, moving forward into a new political era.

Dr. Bennet I. Omalu, MD, MBA, MPH, was working as a forensic neuropathologist in Pittsburgh, when he conducted postmortem examinations of former NFL offensive lineman Mike Webster’s brain. He spotted what would become the hallmarks of CTE, a chronic traumatic encephalopathy, caused by repetitive brain trauma, resulting in lots of bad plague in the brain and leading to a new type of dementia. Omalu published this case in 2005; and subsequently, identified CTE in the postmortem examinations of many other former NFL players. 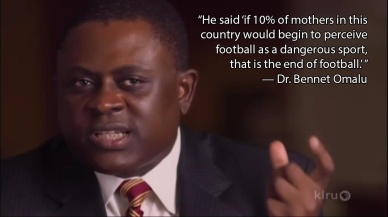 If you saw Will Smith’s movie, Concussion, or heard about it, or think about it for two seconds, you’ll realize the National Football League, NFL did not welcome this information.  Remember, the witch singing in, The Wiz, “don’t nobody bring me, no bad news.”  Yet, Omalu even when faced, with concerted efforts:  to discredit him and his research, verbal insults and abuse, pressure on his firm to let him go, and even death threats, stayed the course.

Today, because of Omalu, CTE is widely recognized as a health risk in millions of patients with histories of repetitive brain trauma, including military veterans. Dr. Omalu knew he had to fight for those who needed help and didn’t know it and those who could no longer fight for themselves.  He protested by working harder to develop a preponderance of substantive evidence that was undeniable. Even in the face of overwhelming opposition, and having to confront his own fear, Dr. Omalu persisted.  He finally overcame both ignorance and resistance and earned being honored.

Omalu is not an isolated example of diplomatically speaking.  Think about Nathan, a prophet in the Bible’s Old Testament.  Nathan had the thankless task of having to tell King David that his affair with Bathsheba made him both an adulterer and a murderer. Like Omalu, Nathan’s position was absolutely and morally correct; but he needed a strategy for how to talk and be heard. Nathan knew he had to tread softly, when facing someone, who had unlimited power, privilege and authority, plus a huge ego. 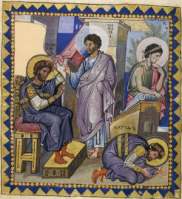 So, in 2 Samuel:12, Nathan chose to tell David a story, which was too compelling for the King to ignore. As he listened, his eyes were opened to see the hurt, and his heart to feel the pain. He not only sympathized; he empathized.

The situation angered the King, and yet blinded, by his own privilege and circle of enablers, David was unwilling or unable to recognize his own faults or sins. Then, Nathan held up a mirror.

The moral from both these stories is that even when unwelcomed, diplomatically speaking, could prick the bubble of indifference.  Equally important, being diplomatic is a way to use your platform, and appeal to the opposition’s humanity; ultimately influencing, possibly changing their viewpoint.

This entry was posted in Politics and tagged diplomacy, health, Inspiration, Politics, race. Bookmark the permalink.